The Athletic Complex Project will bring together new state-of-the-art buildings and facilities that will strengthen St. Mark’s commitment to excellence, enabling every Marksman to reach his full potential on the playing field, and more importantly, in life.

A new state-of-the-art competition gymnasium will serve as the home court for the varsity Lions, carrying forward the legacy of the Hicks Athletic Center. The 800-seat venue will also provide multi-use space for large gatherings and community events, in addition to supporting physical education programs for Marksmen across all three divisions of the School.

A modern natatorium will feature a 30-meter by 25-yard swimming pool, significantly strengthening St. Mark’s aquatics programs. The collegiate-level pool will enable the Lions to host local, regional and national competitions for both swimming and water polo, with large second-floor spectator seating, carrying forward a longstanding history of excellence.

Located at the far northeastern edge of the campus and immediately adjacent to the new indoor facility, the Al G. Hill, Sr. Family Tennis Center will be home to six high-performance courts, enabling the Lions to continue their longstanding tradition of excellence. This modern competition facility will also include a new spectator grandstand.

Connecting the gymnasium and natatorium will be a two-story atrium filled with natural light for Marksmen to congregate, learn from one another and strengthen friendships. Much like the Alumni Commons and Winn Science Center atrium, the new Athletic Complex will provide many areas for student-athletes, coaches, parents, alumni and other community members to come together for games, meetings, events and other important gatherings.

St. Mark’s student-athletes and coaches will prepare for competition in new state-of-the-art locker rooms for all indoor and outdoor varsity sports, leveraging the most advanced technology to support high performance.  The new building will also include improved meeting spaces for teams, coaches, guests and other members of the School community.  The second floor will feature offices for the director and assistant director of Athletics, a multipurpose team meeting room, several conference rooms, and a large alumni room with a terrace overlooking Hunt Stadium.

In addition to a major investment in our sports programs, the Athletic Complex Project will support a number of other important priorities, including expanded resources for campus safety, security and long-term maintenance. Additional infrastructure improvements will feature an integrated storm shelter, revisions to campus parking, new pedestrian walkways and further investments in campus landscaping.

On the evening of October 19, 2019, St. Mark’s was struck by an EF-3 tornado that cut a path of damage across North Texas. The north side of campus took the brunt of the blow, resulting in major damage to nearly every building and the total loss of the Thomas O. Hicks Family Athletic Center and Albert G. Hill Tennis Center. But amid the destruction, there was also an opportunity to build upon the School’s already solid foundation.

Shortly after the tornado in 2019, the Board of Trustees formed the Athletic Center Committee, tasked with determining the best way to replace Hicks Gym and renew the northeast quadrant of campus. Led by Carl Sewell III ’02, this Committee moved quickly, meeting with numerous design firms, consultants, and experts and ultimately selecting CannonDesign.

The tornado created an immediate need for a new athletic complex. But the idea of expanding athletic facilities has been a priority for St. Mark's since before the storm. In January 2017, the Board of Trustees approved Goals for St. Mark's IV, which included a charge to design, sustain, and provide facilities that support and strengthen the Marksman experience.
A review and update of the campus master plan was already well underway when the tornado hit. Working with campus master planning consultant, Jeff Blanchard, the School had been carefully considering the need to expand our athletic facilities.

These plans were obviously made more urgent by the tornado. Shortly following the storm, the Athletic Center Planning Committee immediately began work to determine how best to plan for the future.

It readily became evident that the challenge ahead also presented a unique opportunity to make a once-in-a-generation investment in the athletic program. Once the scope and scale of the project had been determined, a deliberate plan to fund the project was initiated. The Board maintains a strict policy of breaking ground on new facilities only after all funds for the project have been secured. Thanks to the generosity of several early supporters, St. Mark's has raised roughly two-thirds of the funds needed for the School to break ground.

While the gymnasium, natatorium, and tennis center are certainly the cornerstones of this initiative, the budget for the Athletic Complex encompasses so much more, including:


In addition, the total budget includes estimated costs for technology, equipment, furnishings and fixtures as well as possible contingency, escalation and financing expenses.

St. Mark's has been able to set an ambitious construction goal thanks in large part to its dedicated community. Several families have already stepped up and made significant contributions to the Athletic Complex Project, inspiring others to follow their lead.

Among these leaders are the families of Alinda H. and James R. Wikert, Lindsey W. and Michael B. Wisenbaker, Jr. ’93, Wesley H. Wisenbaker ’96, Alissa I. and Cody M. Wikert ’05 and Margretta W. and William S. Henderson and Lyda Hill Philanthropies, who together committed $10 million to the project.

Alumnus and trustee Michael Wisenbaker ’93 spoke of his family’s desire to help St. Mark’s recover from the tornado: “There was no question we would support the redevelopment of the facility. Once the more ambitious plan for the athletic center was outlined to the Board of Trustees, we saw what an integrated athletic facility could do for the campus. Our family wanted to contribute early in the process to create momentum for the project and help St. Mark’s recover from the tornado as soon as possible.”

These gifts make possible the Board of Trustees' longstanding policy of breaking ground on a new facility only after all funds have been committed.
"Our family wanted to contribute early in the process to create momentum for the project and help St. Mark’s recover from the tornado as soon as possible." 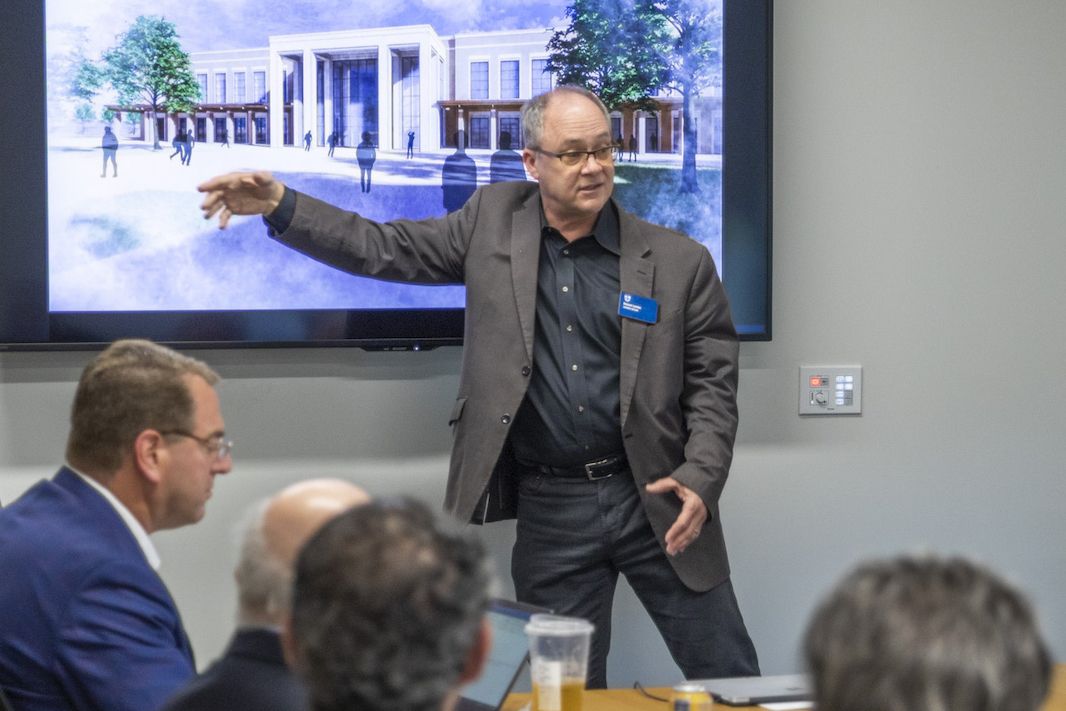 Students talk with key administrators, coaches and architects about what to expect in the Athletic Complex. "We are proud to have a strong athletic program that is committed to excellence, but the true measure of our program’s success is watching the boys excel in the years ahead as a result of their meaningful athletic experiences at St. Mark’s."
– Sean Lissemore
Director of Athletics
As a whole, Lion athletes are extraordinarily talented and successful. But this success is not the only goal of the coaches, trainers and teachers. In every practice, game and interaction, the faculty strive to transform these boys into men of character first and foremost. But the lessons inherent in building a successful man — discipline, sacrifice, trust, commitment to purpose — often lead to a successful athlete.

By focusing on the development of character first and foremost, St. Mark’s transforms boys into good men, who then can become great teammates.

“At St. Mark's, we are not solely focused on winning and losing; rather, it is how we win and lose that truly defines our athletic program,” Lissemore said. “With that being said, character, integrity and discipline are the essential building blocks of any successful team and certainly go hand and hand with winning in competitive sports.”